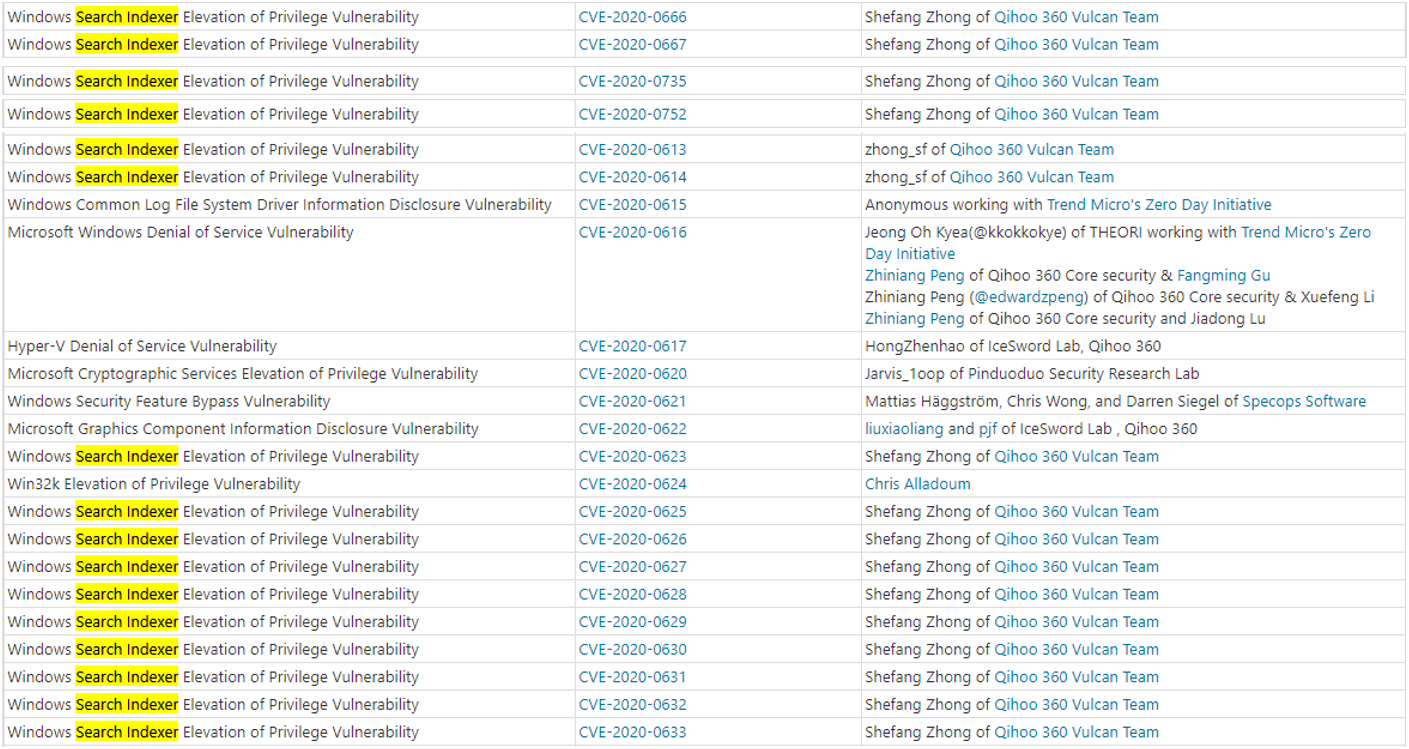 Many LPE vulnerabilities in the Windows Search Indexer have been found, as shown above1. Thus, we decided to analyze details from the applied patches and share them.

Windows Search Indexer is a Windows Service that handles indexing of your files for Windows Search, which fuels the file search engine built into windows that powers everything from the Start Menu search box to Windows Explorer, and even the Libraries feature.

Search Indexer helps direct the users to the service interface through GUI, indexing options, from their perspectives, as indicated below. 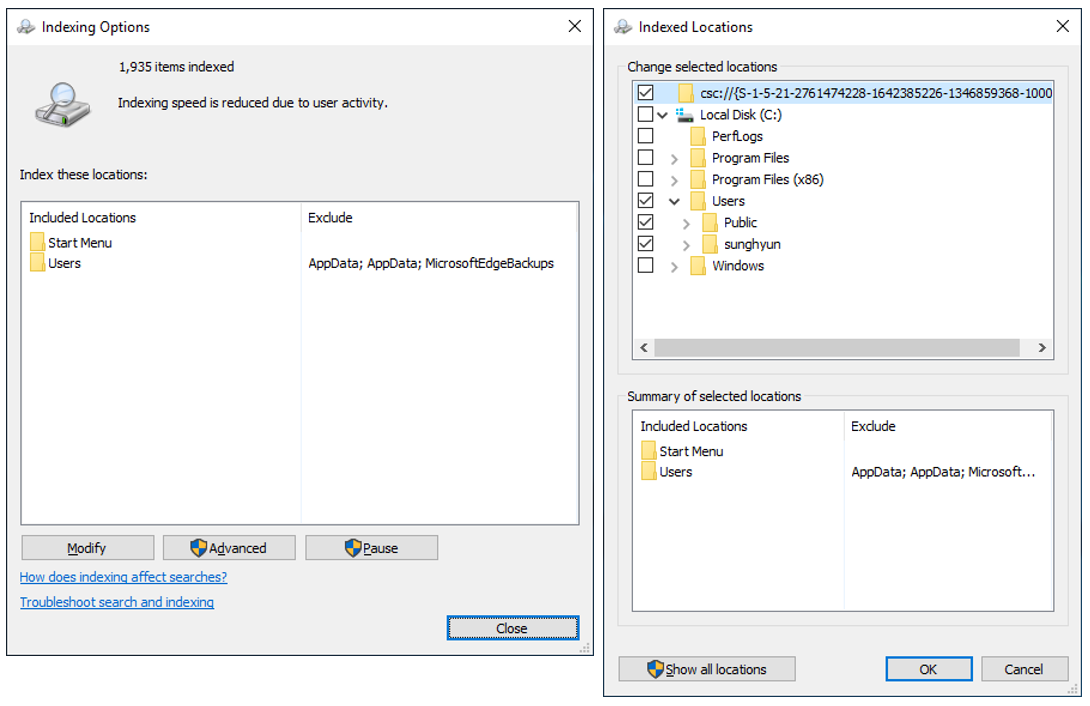 All the DB and temporary data during the indexing process are stored as files and managed. Usually in Windows Service, the whole process is carried out with NT AUTHORITY SYSTEM privileges. If the logic bugs happen to exist due to modifying file paths, it may trigger privilege escalation. (E.g. Symlink attack)

The analysis environment was Windows7 x86 in that it had a small size of the updated file and easy to identified the spot differences. We downloaded both patched versions of this module.

They can be downloaded from Microsoft Update Catalog :

We started with a BinDiff of the binaries modified by the patch (in this case there is only one: searchindexer.exe) 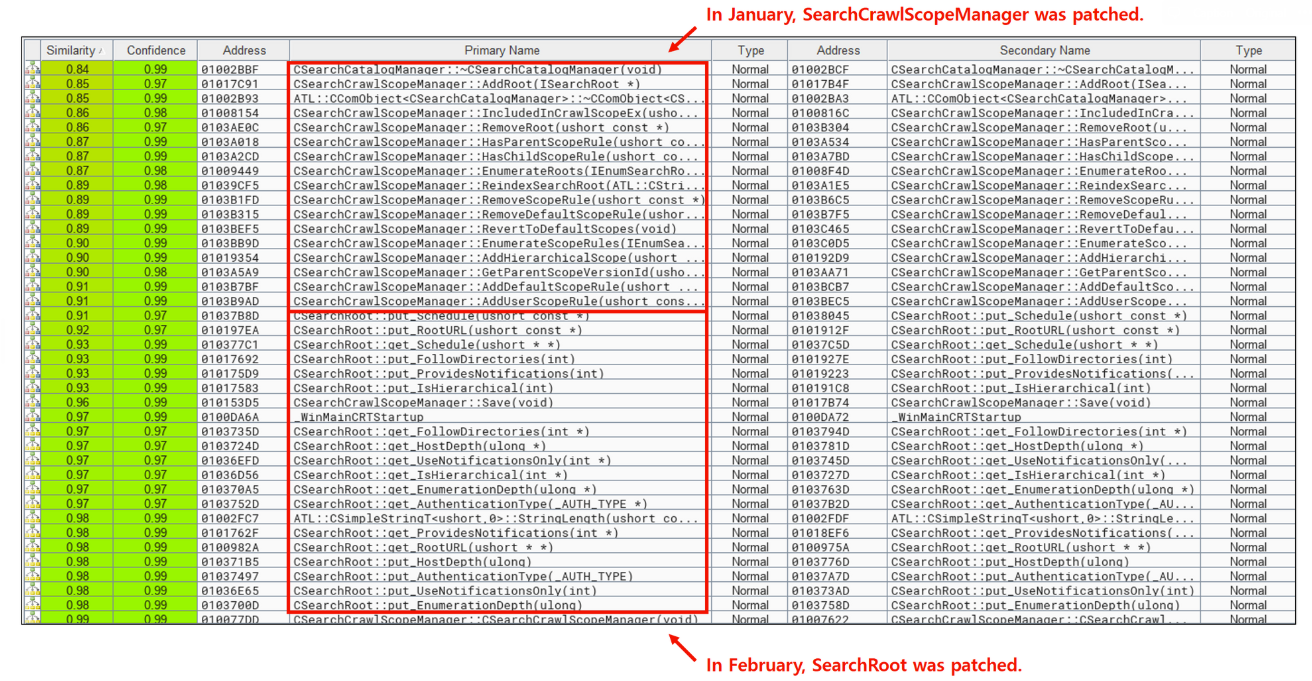 Most of the patches were done in the CSearchCrawlScopeManager and CSearchRoot class. The former was patched in January, and then the latter was patched the following month. Both classes contained the same change, so we focused on CSearchRoot patched.

The following figure shows that primitive codes were added, which used a Lock to securely access shared resources. We deduced that accessing the shared resources gave rise to the occurrence of the race condition vulnerability in that the patch consisted of putter, getter function.

How to Interact with the Interface

We referred to the MSDN to see how those classes were used and uncovered that they were all related to the Crawl Scope Manager. And we could check the method information of this class.

And the MSDN said4 :

The CSM interface is as follows:

For examples, adding, removing, and enumerating search roots and scope rules can be written by the following :

We can also use ISearchCrawlScopeManager to remove a root from the crawl scope when we no longer want that URL indexed. Removing a root also deletes all scope rules for that URL. We can uninstall the application, remove all data, and then remove the search root from the crawl scope, and the Crawl Scope Manager will remove the root and all scope rules associated with the root.

The CSM enumerates search roots using IEnumSearchRoots. We can use this class to enumerate search roots for a number of purposes. For example, we might want to display the entire crawl scope in a user interface, or discover whether a particular root or the child of a root is already in the crawl scope.

We thought that a vulnerability would arise in the process of manipulating URL. Accordingly, we started analyzing the root causes.

We conducted binary analysis focusing on the following functions :

While analyzing ISearchRoot::put_RootURL and ISearchRoot::get_RootURL, we figured out that the object’s shared variable (CSearchRoot + 0x14) was referenced.

Thus, we finally got to the point where the vulnerability initiated. 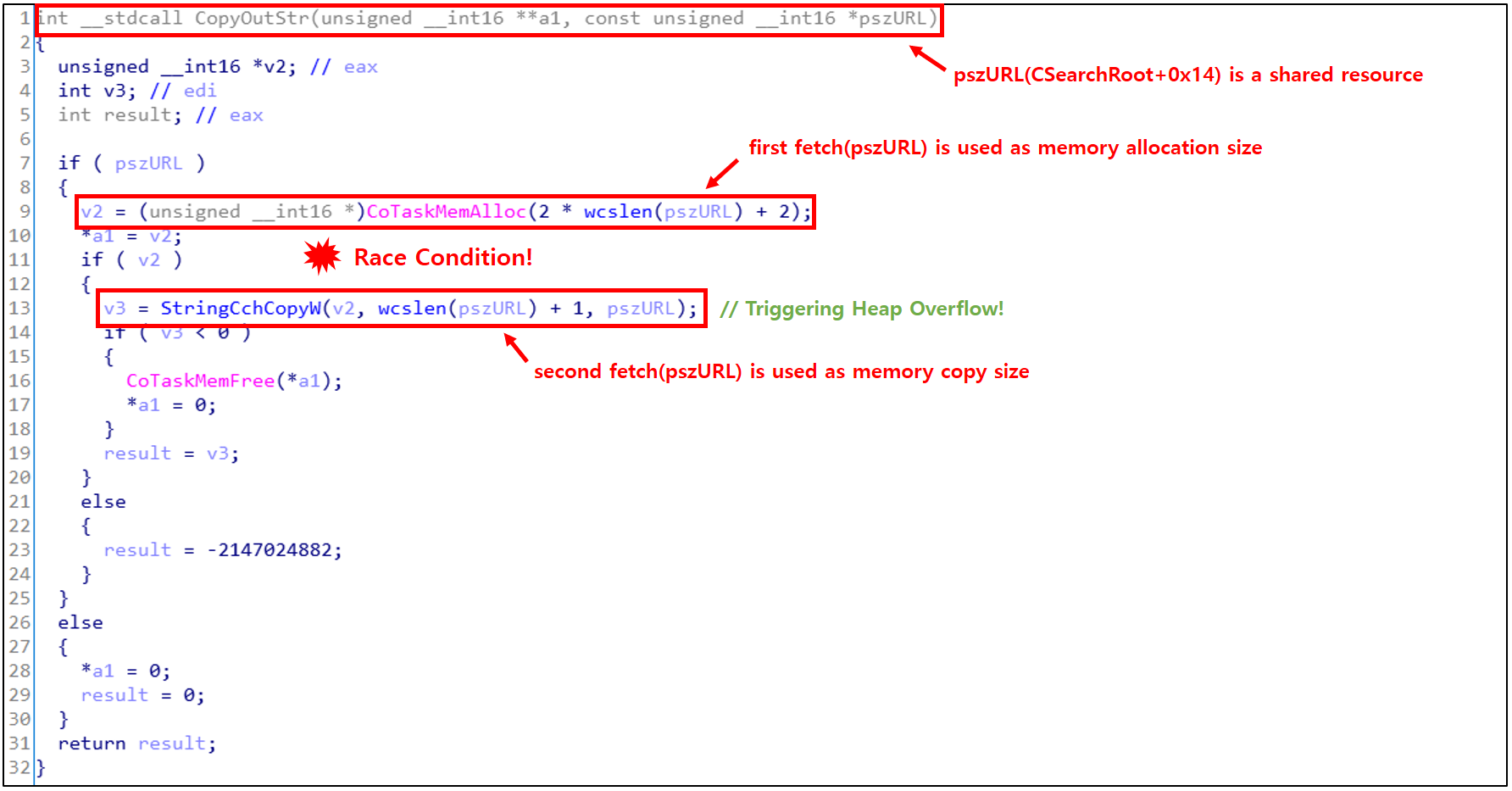 If the size of the first and that of the second differed, a heap overflow might occur, especially when the second fetch had a large size. We maintained that we change the size of pszURL sufficiently through the race condition before the memory copy occurs.

Through OleView5, we were able to see the interface provided by the Windows Search Manager. And we needed to hit vulnerable functions based on the methods of the interface.

We could easily test it through the COM-based command line source code provided by MSDN6. And wrote the COM client code that hit vulnerable functions as following:

Undoubtedly, the race condition had succeeded before the StringCchCopyW function copied the RootURL data, leading to heap overflow.

We ought to create an object to the Sever heap where the vulnerability occurs for the sake of controlling EIP.

We wrote the client codes as following, tracking the heap status.

When the client’s COM is Uninitialized, IRpcStubBuffer::Disconnect disconnects all connections of object pointer. Therefore, if the client calls CoUninitialize function, CStdStubBuffer_Disconnect function is called on the server. It means that users can construct fake vtable and call that function.

However, we haven’t always seen IRpcStubBuffer allocated on the same location heap. Therefore, several tries were needed to construct the heap layout. After several tries, the IRpcStubBuffer object was covered with the controllable value (0x45454545) as follows.

In the end, we could show that indirect calls to any function in memory are possible! 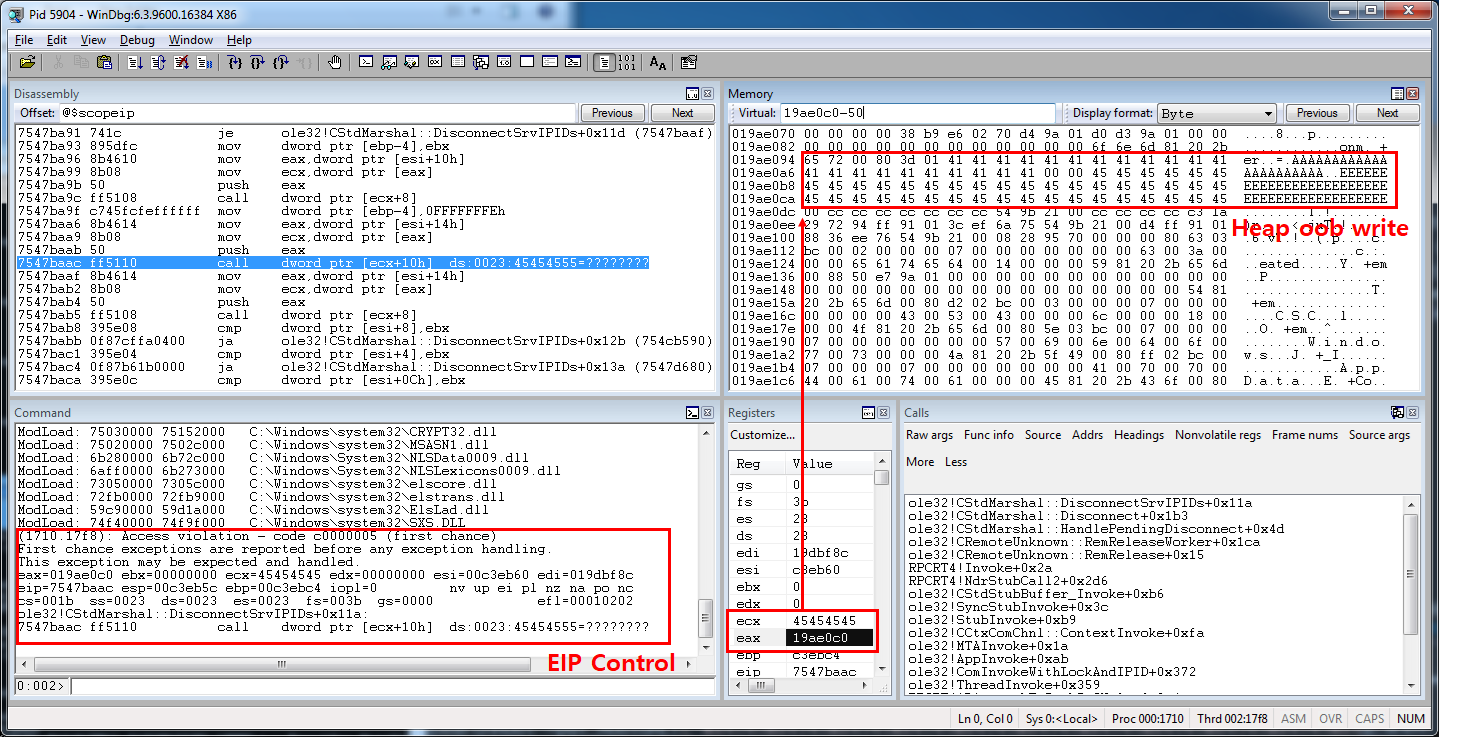 We hope that the analysis will serve as an insight to other vulnerability researchers and be applied to further studies.